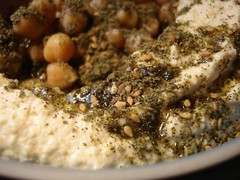 A word about ingredients...

Since I first started making humous, I’ve discovered that tinned chick peas have a *lot* of salt, so if you have a pressure cooker, soaking and cooking is fairly easy (and much cheaper).

You need to soak the chickpeas in water for a minimum of 7 hours – I tend to do this before I go to bed, and then cook in the morning. Put the chickpeas in the pressure cooker, just cover with water, and cook for 25 minutes. Drain off the water and reserve for the humous.

If you do buy tinned, personally, I resent paying 59p for a tin of chick peas in Sainsbury's: go to your local ethnic food type shop, and they'll be 20p. You can also get the tahina there, which is often called tahini... the light sort is nicer for this.

Also, these are just proportions. I make up to four times this amount at once in my Magimix.

This is a lot easier if you have a magimix/blender

A word about toasting pine nuts

After years of burning them under the grill, I discovered from a Sefardi friend that the secret is to cook them in their own inherent oil in a small pan on a light flame. Watch them, though; they’re never great burned.

And a final word about Za’atar

Za’atar is a sumac-based middle eastern herb mixture that you can buy from Seasoned Pioneers, or in a Lebanese shop, if you live in Kilburn. Don't just buy sumac, it's the blend that makes the difference. Personally, I get mine sent from a friend in Israel.